skip to main | skip to sidebar

1. Wes Streeting has disgracefully played the race card to criticise the wave of student activism.

We would like to express our severe disappointment at the NUS President for his comments regarding the wave of student occupations that has taken place over the past month.

Thousands of students have been involved in these protests and the very breadth of the occupations serves to prove the wide support for these actions. Over 30 university campuses have seen some form of student action.

Any minor disruption caused by these occupations has to be offset against their success in highlighting the desperate humanitarian situation in Gaza, including the destruction of the Islamic University of Gaza.

The allegation that the occupations have fuelled anti-semitism on our campuses is as disgraceful as it is untrue. Thousands of students, many Jewish, have been involved in action to help rebuild the Gazan education system and support the right to education for Palestinians.


2. Meeting on Thursday, everyone welcome:

This Thursday (the 19th), SOAS Stop the War are holding an activist meeting in the common room. The primary aim is to discuss upcoming actions and events in and around SOAS, and coordination for national and international events. Come along and help out!

'With the success of occupations throughout the UK, Sheffield Hallam students and workers from around the city voted to occupy the tenth floor of the Owen building. This is to make practical demands of the university in solidarity with Palestinians and to condemn the actions of the Israeli state.'

excellent news!
Posted by SOAS students in solidarity with Gaza at 16:10 4 comments:

http://occupied-bradford.blogspot.com
Posted by SOAS students in solidarity with Gaza at 09:10 24 comments:

Please send messages of support to qmoccupation@googlemail.com.
Read a short commentary at http://solomonsmindfield.net
http://queenmaryoccupation.blogspot.com/
Posted by SOAS students in solidarity with Gaza at 08:46 2 comments:

http://leedsunioccupation.blogspot.com/
Posted by SOAS students in solidarity with Gaza at 19:02 No comments:

We occupied the BBC on Portland place today... 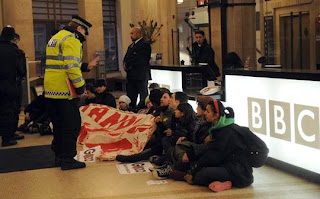 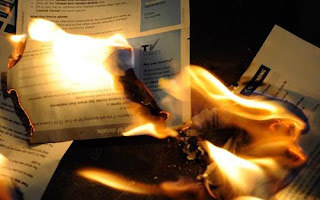 We made it onto BBC News 24, Newsnight and loads more (even the Metro and LondonPaper). See http://solomonsmindfield.net for more details, videos and pics.
We received 2 texts within 3 or 4 minutes of being ejected by people who had seen us being kicked out.
More on this soon...
Called within just a few hours and hardly built at all, about 50 or 60 protesters turned up to BBC on Portland place to protest about the disgraceful decision not to air the DEC appeal.
We got there a bit early and decided to storm the entrance leaving the police behind. We immediately sat down, linked arms and started chanting.  We had a lot of support from BBC staff entering the building (i hope they can pull of a strike over this) by sort-of sneaky thumbs up when no-one was looking. the video below shows a small quiet period but really, it had a  very good impact. Loads of press turned up, I'm just waiting for the reports to stream in!!
I was on BBC World Service and had to deal with an idiot Zionist who tried, somehow, to tie in Iran and their supposed nuclear weapons!!
Found a short video so far. Does anyone know who to 'embed' it?
http://news.bbc.co.uk/1/hi/uk/7850407.stm
they said: (italics my own-there is a definite case of contradictory conscience/reporting here)

Around 20 (i would say there was 12 of us inside!!) campaigners from the Stop the War Coalition (SOAS StW society) walked (actually we stormed) into the lobby of the central London building with a large banner proclaiming Hands off Gaza (the only banner we could find!).

They were removed by police before continuing a noisy protest outside, during which some of them set fire to their television licences.

I should be receiving more videos and photo's soon...
Posted by SOAS students in solidarity with Gaza at 18:40 2 comments:

Call for collaboration between occupations

KCL have released this statement.

We congratulate you on your stand against the atrocities committed in Gaza, and on your courage to take direct action!

Here at King's we are delighted to be part of a strong and vigorous movement that has become national. We very much wish to strengthen coordination between the different universities, in order to strengthen our movement and cause. This will increase the ability of students to have their voice heard in the name of justice and equality.

We therefore suggest the following three points:
1. The intensification of communication between universities
2. The production of a bulletin to publicise the experiences of all occupations.
3. The issuing of a joint statement to be distributed as widely as possible (media, trade unions, the government, Universities UK, internationally etc).


1. The intensification of communication between universities
In order to strengthen our cause we consider the creation of a united student front for Gaza a chance not to be missed. We therefore suggest that we intensify in any possible way our communication, in an important initial step on the way to achieving this goal. Moreover we suggest a meeting of students activists from all universities in occupation.

2. The production of a bulletin containing the experiences of all occupations
At King's we sense that the occupation is becoming a formative experience for many student activists. We are certain we are gaining experience that should be shared and disseminated as widely as possible within the campus communities of Britain. We are sure we and future student activists have much to learn from the different experiences of dealing with issues such as mobilisation, organization, negotiation, etc.
We therefore offer to edit a bulletin containing these experiences to be printed and send out to you in pdf. on Monday. This necessitates the collection of articles of approx. 500 words from each university by Sunday at 3pm. We would suggest the articles should deal with such issues as: The mobilization of students, the actual moment of occupation, problems with university security guards and police, negotiations with the university administrations, the organisation of activists during the occupation, forms of meetings and decision making, the establishment of work groups, public relations, solidarity work with NGOs, trade unions, etc.


3. Joint statement
In light of the success of our developing movement we should have a deep far-reaching discussion amongst and between ourselves on the political demands we want to put forward. This should be pursued openly and fully in order for fully developed demands to be decided upon so that our movement can move beyond the present confines of our respective universities.

We are very proud to be part of this nation-wide movement for Palestine and to contribute to the revival of student activism and the empowerment of students around the country. We wish you the best of luck with your occupations and other activities, and will be very, very glad to hear from you soon.

Don't give up, the struggle for a free Palestine continues!

NB:
Two of our participants have proposed the following demands for discussion at King's. We attach them here in order to stimulate discussion:

We call on the British government to:
1. Condemn the Israeli state's attacks and blockade on Gaza
2. To call for an international investigation into war crimes committed in Gaza
3. To temporarily expel the Israeli ambassador from the UK
4. To cease all arms trade with Israel

We call on the British Government, the Ministry of Education and Universities UK to:
1. Guarantee that universities remain or return to the status of public spaces, including the right of students to arrange events with the participation of non-students at campus.
2. That all students have the right of assembly and free speech on all campuses.
3. That all students are guaranteed the freedom of movement within and access to campuses, without any harassment and control carried out by security guards or police.
4. To guarantee the freedom of students to spread information about their activities, and to impose harsh restrictions on all commercial advertisements within university campuses.
Posted by SOAS students in solidarity with Gaza at 01:44 5 comments:

SOAS students in solidarity with Gaza